What Percentage of People do not Repay their Pay Day Loans?

Approximately 15% to 20% of people who take out payday loans are unable to repay them. This means that they end up writing off the debt, or going through separate loan arrangements to pay them off accordingly.

Payday loans are often used in urgency, or used by individuals who may have poor credit scores. As such, there is always a default rate for payday loans. This default rate accounts for high interest rates charged in repayments to make up for this.

How Many People do not Repay Their Payday Loans?

Statistics show that 15% to 20% of payday loan borrowers do not repay their loans. Consequently, repeat borrowing rates are extremely high with 1 in 4 payday loans either re-borrowed or rolled over 9 times.

There are a number of reasons as to why people may be unable to repay their payday loans. Some of these instances may include sudden unemployment, urgent medical bills and growing debt.

Why do People not Repay Their Payday Loans?

Below is a list of some of the most common reasons as to why 15% to 20% of people may be unable to repay their payday loans:

Payday loan borrowers typically have poor credit scores. This explains why they are unable to secure long-term loans with lower interest rates from banks or traditional lenders.

Poor credit insinuates that the borrower is unable to meet a specific repayment plan. As such, they turn to payday loans – which they are also unlikely to be able to pay off.

Payday borrowers are typically found to be in debt five months out of the year. This is because they may be repeat borrowing or already in a spiral of debt before they take out the loan.

The growing debt repayments may mean that they simply cannot meet the payday loan payment deadlines on time or at all for that matter. 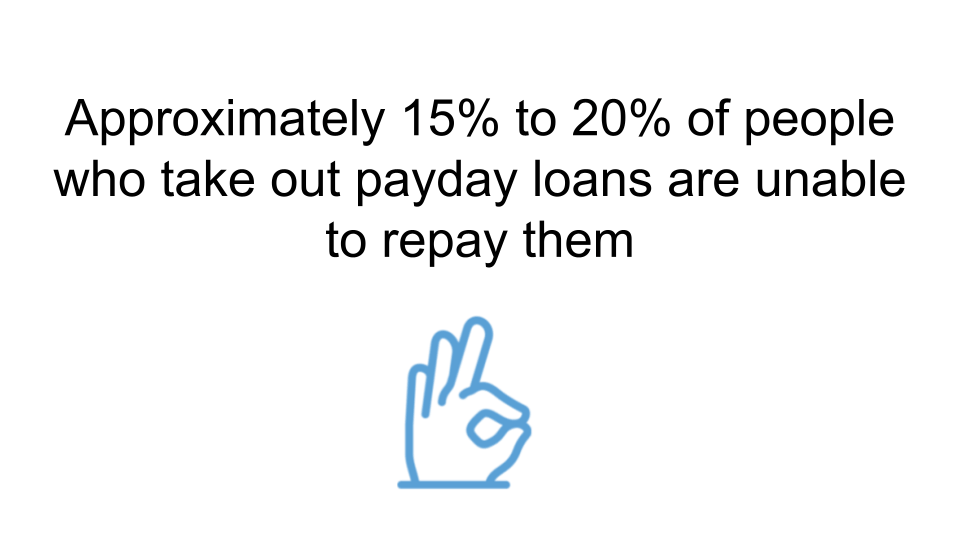 In the US, the majority of payday loan borrowers fall into a low-income bracket averaging around $30,000 income annually. As such, they may even struggle to meet their monthly expenses such as utility bills and rent before they can even consider repaying their payday loan.

Preoccupied with Other Loan Repayments

It is likely that most payday loan borrowers are already in situations whereby they are paying back other loans. Around 80% of payday loans are in fact taken out without 2 weeks of paying off a previous payday loan.

Furthermore, three quarters of payday loans are taken out by individuals who have already used them. As such, borrowers may already be preoccupied in paying back their already-borrowed loans and may not be able to afford paying off a new payday loan that they may have taken out.

Payday lenders charge the maximum rate that is permitted under state law. This extremely high rate can make monthly repayments become a massive burden for payday loan borrowers, as the amount increases monthly.

What Happens if you do not Repay Your Payday Loan?

If payday loan borrowers cannot repay their loan within the agreed time frame, then their lender is entitled to charge additional fees – this covers instances whereby re-borrowing or rolling over the debt is necessary. The lender will then set up automatic withdrawals from the borrower’s account so that they can try to regain as much of what they lent back.

If the lender is unable to withdraw this money from the borrower’s account, for instance due to insufficient funds, then they may begin collection calls. Collection calls involve calling the borrower or even directly visiting them in-person in an attempt to collect the outstanding debt.

As such, the consequences of not being able to repay your payday loan include being charged late fees and in some cases, suffering from an even worse credit rating – which can in turn impact future attempts to borrow loans and may lead to a cycle of further payday loans which can consequently lead to further spiraling debt.

How do Payday Loan Lenders Try to Improve Their Repayment Rates?

There are a number of ways in which payday loan lenders will try to improve their repayment rates. They will firstly try to get into contact with the borrower if a payment is late through a follow up call.

If the borrower does not reply, this communication will then go straight to email – so that they is a copy and proof of the lender chasing the borrower for payment.

If the lender has sought after multiple avenues to receive the late payments, such as trying automatic withdrawals from the borrower’s bank account, or even receiving permission to take funds from their income, then the case will be taken up between the lender and borrower in court.